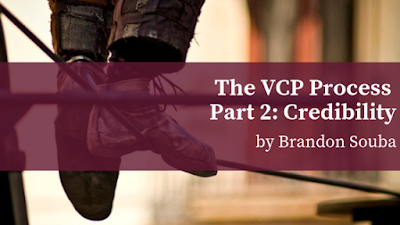 My last blog talked about the first step in the VCP Process - Visibility. This time, I want to dig into one of the more challenging parts of the process - Credibility.

I describe credibility as walking a tight rope. First, you have to climb to the top of the platform, then start on the rope, going slow and steady as you make your way across, until eventually you make it to the other side. The big take away on this analogy is credibility takes time. But also, if you fall off at any point as you cross to the other side, you don’t get to pick up where you left off. You have to scramble back to the first platform and start all over.

Let’s think about the other members in your chapter. Are there members you are just not interested in passing referrals to? I’m not talking about the ones where you don’t know enough about their business to know the referral they are looking for. (That can be corrected with a few One to Ones.) I’m talking about the members you don’t trust, or a member that has burned you on a referral you gave them, or a member that is always late or never shows up for the meeting. We’d like to think that no BNI members would do anything to lose credibility in their chapter, but it happens. Once a member loses credibility, they go back to the beginning of the VCP process – Visibility. You see them at the meeting and that is about it. If you have reached this stage with someone, is there anything they could do to change your mind about them?


When I was a member working in the countertop industry, I had the misfortune of being burned by the General Contractor in my chapter. I had clients that selected their countertop and backsplash, picked the color and options on the first appointment, and signed the deal that day. It was awesome and the customers were a joy to work with. They had a special request to raise a desk area in the kitchen so it made a long buffet area instead. Since I had passed referrals to the General Contractor in my chapter before and he did a great job, I did not hesitate to refer him to do this for my clients and they happily took the referral.

It all started off well when he went out to meet with them. He found the original cabinet maker, which can be challenging, but felt they wanted too much money to build a matching cabinet. He told the customers he would build it himself. Three weeks went by. He wasn’t attending BNI meetings and had no contact with our clients. After making a bunch of phone calls, I finally got a hold of him. He said he was on a big apartment job and could no longer help me out with the desk referral. He connected me to another contractor that could to take it over. It took me another two weeks to get a hold of this person, only for him to tell me he was also working on the same apartment job and could not help me. At this point, my clients have now gone FIVE WEEKS with no progress. Luckily for me and my clients, I then found a handyman that was able to get it taken care of in a week. When the original contractor started showing up to the meetings again, he never said a word to me about his actions towards the referral I passed him. That is when he lost all credibility in my book, and I no longer was comfortable passing him a referral. When he chose not to renew his membership, honestly, I was excited to have a new contractor in his place, since I had plenty of referrals to pass.

Think about that story, and take a look at your membership: Have you ever put another member in the same position I was in with the contractor? If you have, are you no longer receiving referrals from that member? Life happens and mistakes happen, I get that, but what we do after the fact makes a difference. Honestly, I may have started working with that contractor again if he would have asked how things went after he gave up on me, but he didn’t. He didn’t even offer me an apology.

Credibility is what leads to Profitability. In some cases, members lose credibility and there is nothing they can do to gain it back, but sometimes a One to One might help get members going in the right direction to rebuild their credibility.

Look at the BNI code of ethics, read them over often, and make sure you are truly applying them to your membership in BNI every day. That way, you will be diligent with your referrals and continue building credibility in your chapter.

I look forward to going over the last piece of the pie next month, Profitability!