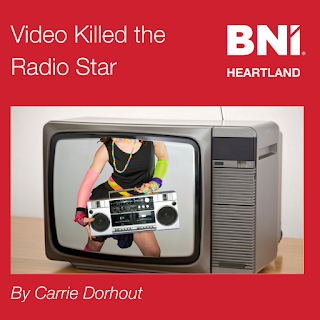 If you remember this lyric, you remember the revolution that came with it. The song “Video Killed the Radio Star” by the Buggles, was written in 1978 and released in 1980. The band may have been a One Hit Wonder, but its famed lyrics marked the beginning of a phenomenon that would entertain and transform cultures for years to come. It made an unprecedented debut as the very first video to be aired on MTV at the inception of the iconic channel in August 1981 in addition to being the one-millionth video to be aired on the same channel in February 2000.

The song has several interpretations if you do some research. The most common is that the song is about a “radio star” whose acting and singing career was “killed” by television, or “video,” because the star couldn’t or didn’t embrace the new technology.

While this is an interesting stroll down memory lane, what does this song have to do with BNI? I found this song coming to mind many times over the last several months as I visited my chapters in their online meetings.

In BNI, we often talk about the VCP Process. V=Visibility, C=Credibility, P=Profitability. You have to have Visibility in order to gain Credibility if you want to see Profitability. At the very least, your attendance at your chapter meeting helps to fulfill the Visibility part of that. Now that most of us meet using an online platform instead of in-person, our interaction has changed a bit, but the power of visibility has become even more important.

Your chapter members need to see your face, now more than ever. We all know we have the option to turn off our video in our Zoom meetings. However, understanding the value of Visibility, it makes sense to turn your video on.

Going back to the song, we don’t know why the radio star didn’t make it in the video age. Did they think it was silly or a fad? Did it make them too uncomfortable? Did they feel they shouldn’t have to change the way they’ve always done things? Regardless of the reason, when the new way came in, this star was forgotten because they weren’t visible.

I challenge every member to turn their video on for the entire meeting. Don’t let your Visibility get killed!

I dare to bet that you may enjoy your chapter meeting a little more with the video on too. Turn your video on – and keep it on as much as possible. You most certainly will see an increase in referrals when your members can see your face for 90 minutes every week!

Who knew a silly song from 40 years ago would have such wise words for us today?