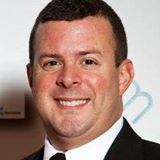 Vince Vigneri, Executive Director of BNI Heartland, US Business Coach, and Global Trainer, together with his wife, Kristina, operate 3 franchises for BNI in Nebraska, Wyoming, South Dakota, and Western Iowa. The Heartland Region in 2015 passed over 47,000 referrals that generated more than $35 million in business to the members, that is an average value per seat of over $28,000.
Vince, an only child of two only children, graduated from Creighton University, where his work ethic and core value of helping others succeed was instilled. Vince was introduced to BNI as a travel agency owner in the late 90s, after becoming a self-taught travel industry expert, starting at 7 years old. After the events of September 11th, he made a career change to his degree field, finance, becoming a multi-line insurance agent. The constant remained BNI, and when the initial opportunity to purchase the BNI franchise arose, he seized it.  In addition to writing monthly articles for BNI Heartland’s blog, blog.bniheartland.com, he also publishes a Regional Podcast with Sr. Area Director Brandon Souba.

Vince is part of the Franchise Training Team, helping educate franchise owners in BNI how to 'run' a more efficient BNI business.  Vince also served as the BNI District Director for the Northern Plains from 2012-2016, working with other Executive Directors to reach their goals, while providing them a regional contact for the BNI Global Support Team.  Vince has spoken at 6 BNI US National Conferences, and was the Keynote Speaker for BNI Brazil’s first National Conference in 2014!

Vince and Kristina, married in 2001, reside in Elkhorn, NE with their two children, Rocco and Addie, and two dogs, Oreo and Ivy.  They have been members of BNI’s Founder’s Circle annually since 2009 as well as BNI’s Mastery Circle since 2013.   In his spare time he enjoys playing a round of golf as well as running and biking with his family. He and Kristina attend many concerts and are avid sports fans, attending Nebraska Football games, Creighton Basketball and Baseball games, and the College World Series.

Something many do not know about Vince is that he attended his Great-Great-Great Aunt’s canonization, where she became a Saint in the Catholic Church on April 18, 1999. His burning desire is to help people grow their business using the key concepts of BNI, and his key to success is putting himself in other people’s shoes.
Email ThisBlogThis!Share to TwitterShare to FacebookShare to Pinterest
Home
Subscribe to: Posts (Atom)
BNI of the Heartland, serving Nebraska, Western Iowa, South Dakota, and Wyoming. Join us for Business Network International news in the region, chapter showcases, facts, and fun!